One of the best city builders and settlement managers of 2022 is now on Steam and I want to give you some important tips to get you started in Against the Storm! 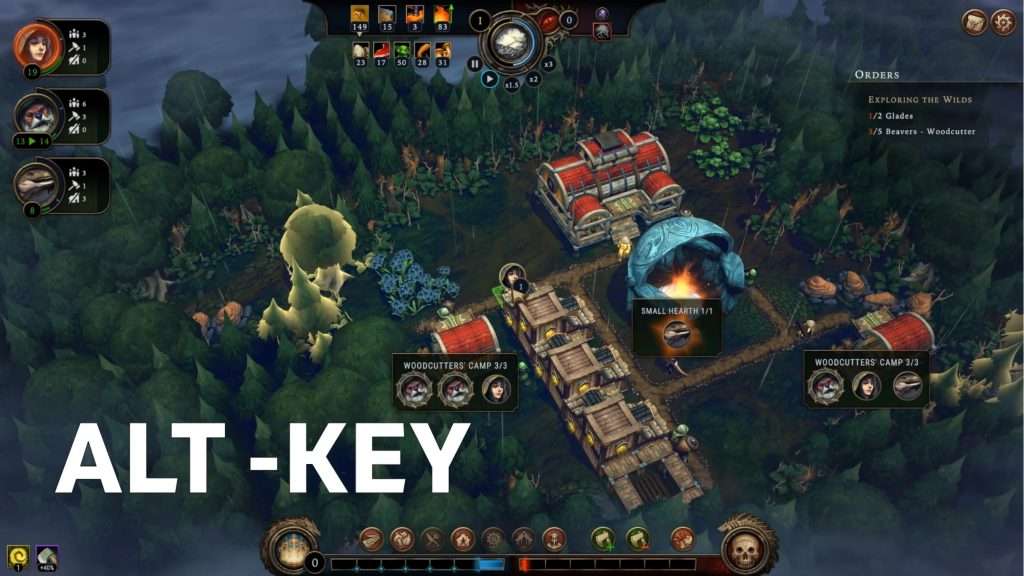 The first one is really simple, using the ALT key on your keyboard, you enable an overlay on the screen which shows you all the current workplaces and the settlers working there. You can even manage and change workers using the left click and the portrait of the settler you want to work in that workplace. 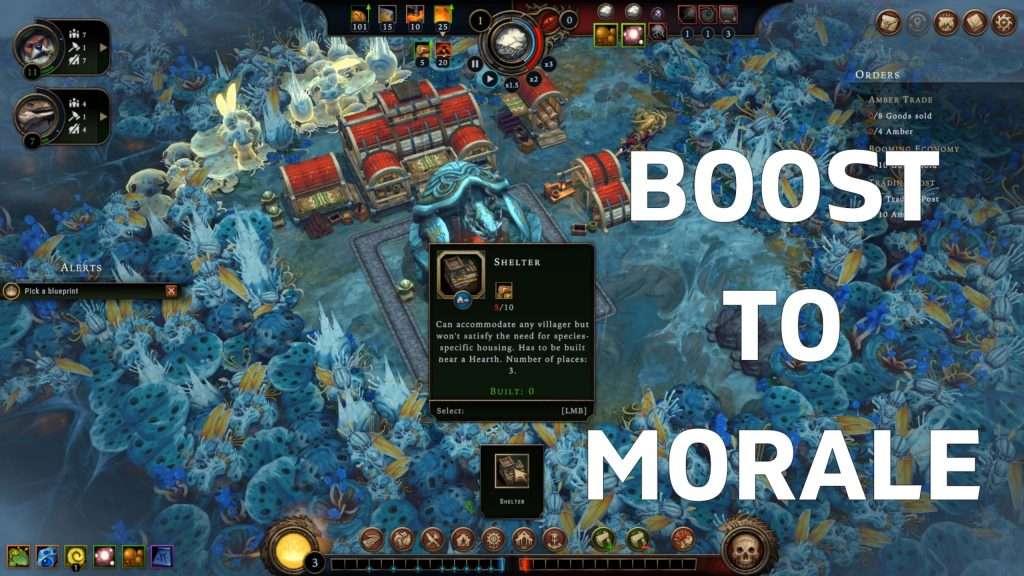 The second tip is about homes and it’s much deeper, so it needs some explanations. Keeping your settlers’ morale maximized in Against the Storm is of the highest importance. This is because if they leave your settlement due to low morale, you won’t be able to finish the queen’s orders and your new settlement will fail.

Therefore, my second tip for you is to build homes for your settlers as soon as you start a new settlement, but only after you place the first woodcutter camps and start chopping down trees or giant mushrooms for wood. This is because homes cost wood to build, but you also need a constant supply of it to keep the eternal fire going in the ancient hearth. This is the main source of morale for your settlers and if it goes dark, so does your settlement. 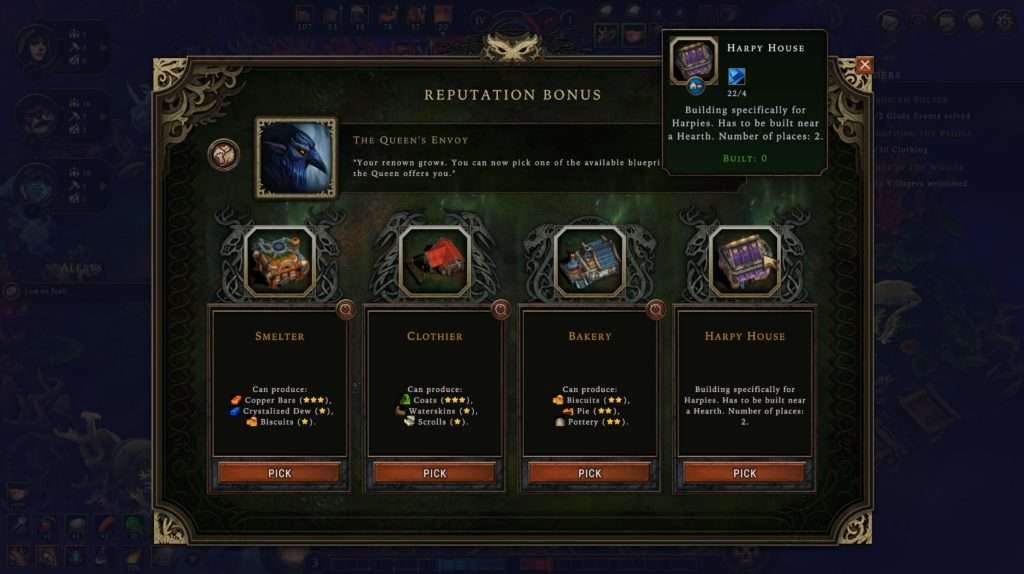 There are special home types specific to each species of settlers, but you unlock these near the end of each new settlement-building mission and you cannot unlock all of them. So only pick the one that benefits the species of settlers that has the lowest morale to give them that extra boost to keep them from leaving. 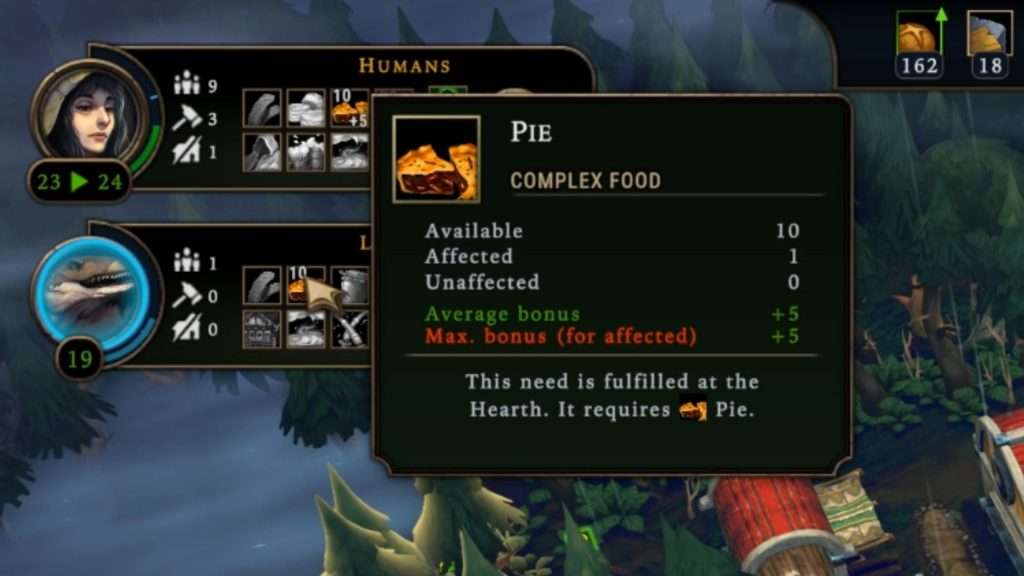 Another way to keep settlers’ morale high is to feed them complex foods they like. My tip here is that you can learn about complex foods by expanding the settlers’ panels over to the top left and looking through the icons representing food. Each species has favorite complex foods and some tastes overlap. 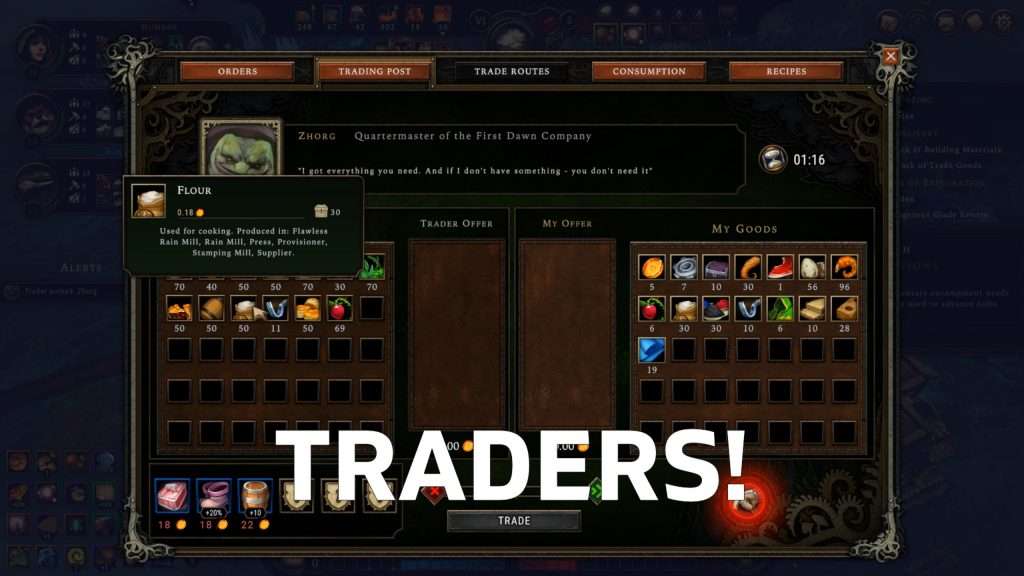 Building a trading post will start the clock to the next trader’s arrival. But while you can build more than one trading post, it won’t lead to more traders coming, so one is enough. And you need it very early in the building of each new settlement. My advice is to build it after the two woodcutter camps and three shelters.

My tip here is to carefully look at the prices of each item and consider what they are used for. First, because you don’t want to sell what you need but what you can spare and don’t use locally. 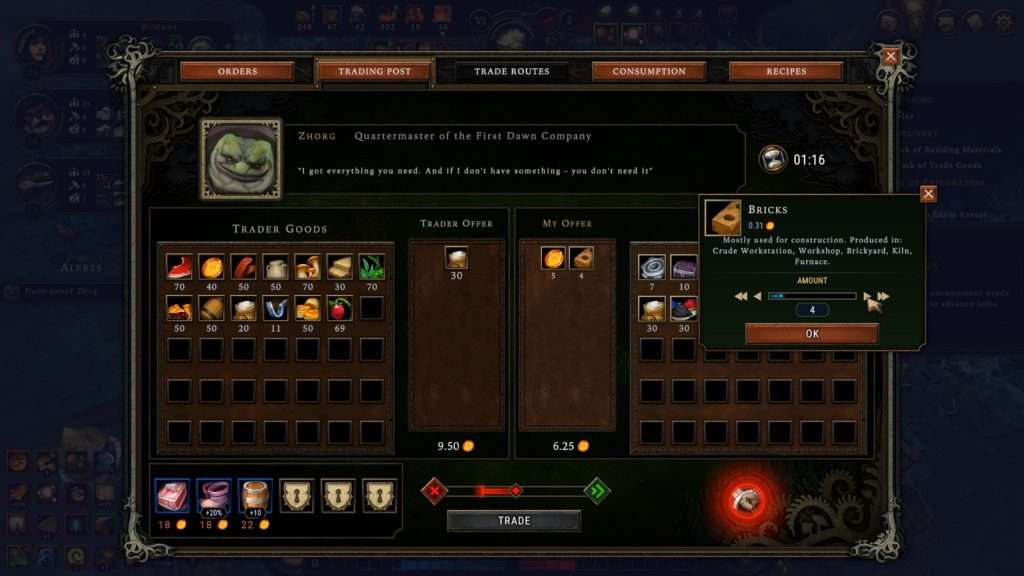 Because while raw resources might seem most abundant and even have good value, you don’t want to be selling them. The reason behind this is the fact that all raw resources can be crafted, in combination with others, into more expensive items or into many less expensive items whose combined value is much higher than those starting raw resources. It is these middle or final products that have some of the highest prices, excluding rare items and packaged goods. 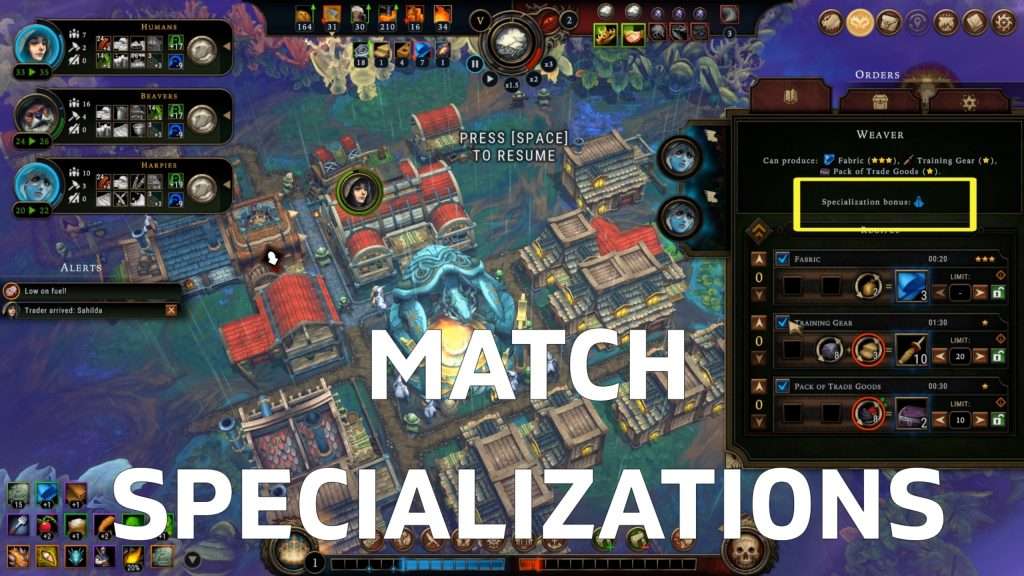 Beavers are great when it comes to woodcutting, the production of things from wood, mining, and similar workplaces. Humans like to farm and produce ale, lizards prefer working with meat, collecting or grilling it, and in hot workplaces like the smelter. Harpies like to work with cloth and so on. 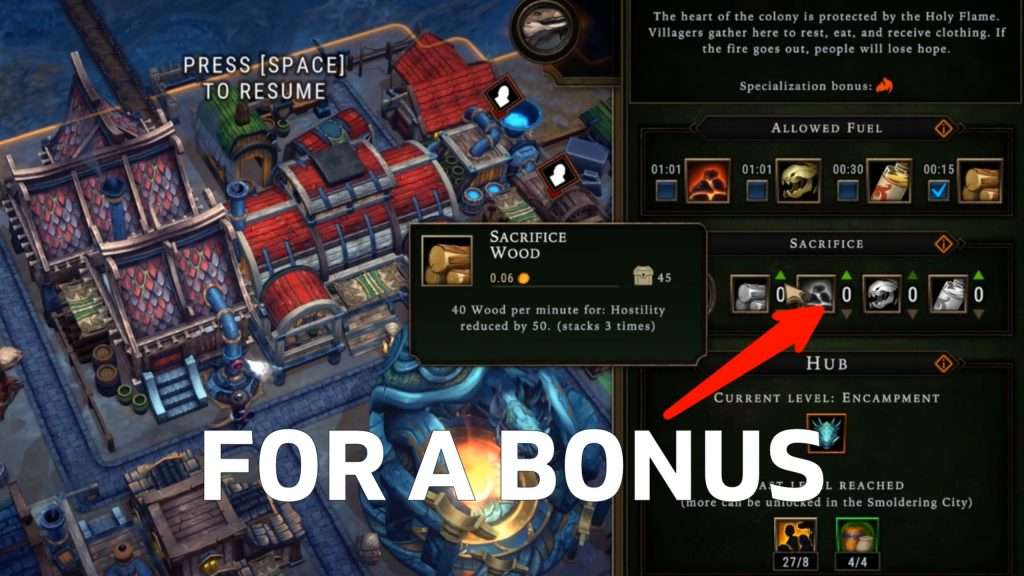 A tip about hearths is to burn extra fuel to gain a special bonus for a time. Depending on what is going on in your settlement, there are different bonuses that will help. If you have angered the forest with too many woodcutters, opening up new glades, and having a high population, then burning extra wood or coal will reduce the negative influence of an angry forest, especially during a storm when your settler’s morale is already taking a hit. Other fuel types give you other situational bonuses, which will greatly benefit you at certain times. 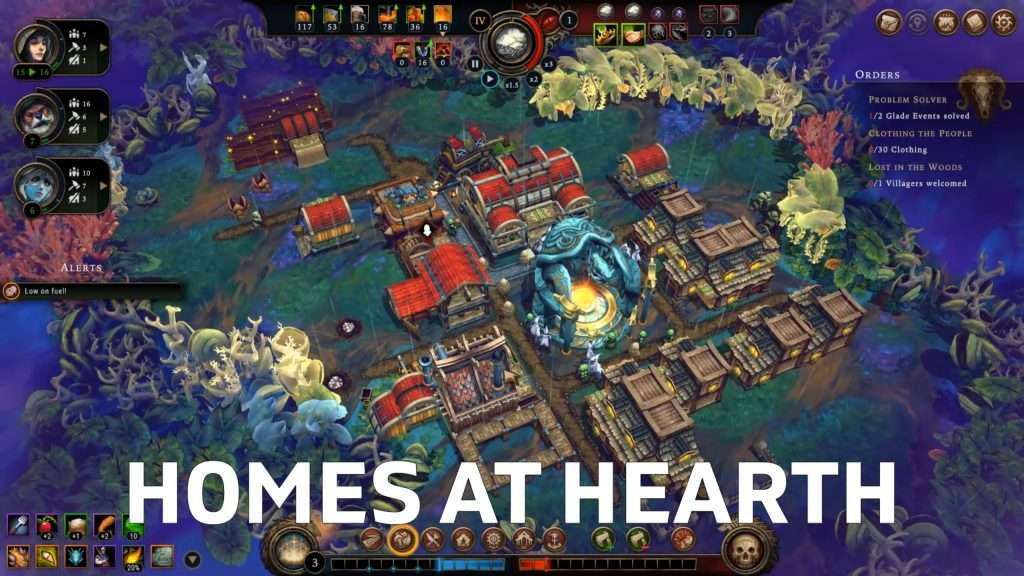 Correct placing of buildings in Against the Storm is also highly important. You want your homes close to the main hearth so settlers can feel warm and safe while buildings that use and produce items need to be close to your town hall, which is your main stockpile to keep delivery times short. Buildings from where settlers go to collect raw resources can and will be on the edges of your settlement. 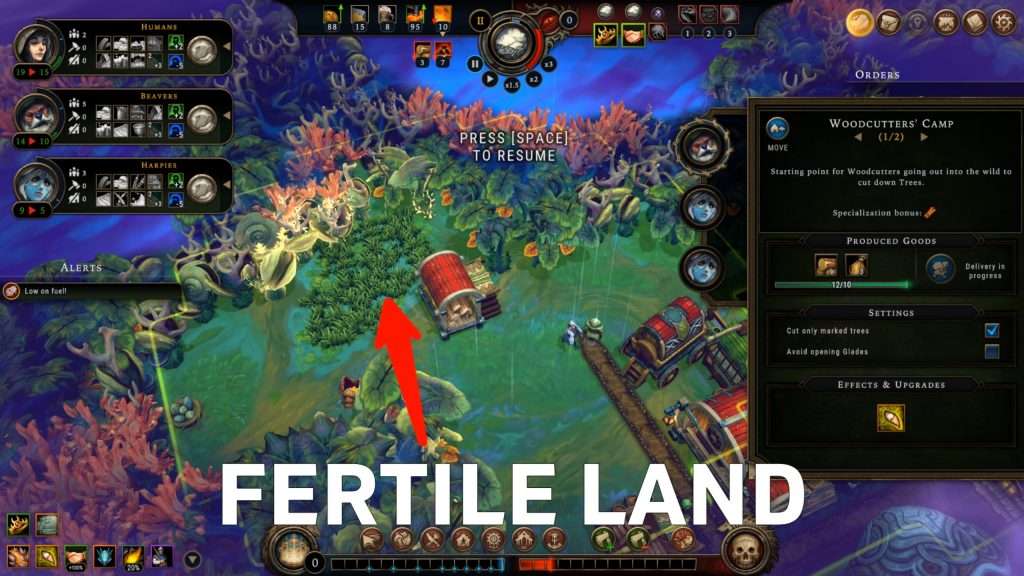 When you discover fertile land, usually some of it will be blocked by trees. So cut all the trees around a fertile field to uncover more fertile tiles.

Marking trees for cutting with the marking tool and checking the box in the woodcutter’s camp to only cut marked trees will prevent the accidental opening of new glades, some of which might carry dangers you are not prepared to deal with.

And on that topic, make sure to trade for tools when you have a chance because they are very often the item necessary to complete tasks in newly opened glades which give big rewards useful for both the completion of the scenario and the life of your settlers.

Another very important tip is to always check what resources can be used in a building for recipes when making new items and also when you are solving mini tasks inside glades. This is because behind most items is a radial menu that lets you switch which items are used and if you don’t have one item available, you might have some alternative stockpiled and ready.

This game, while small in scope, is full of overlapping gameplay systems and mechanics, which make it a joy to play. Have fun!

Make sure to check out Perafilozof’s YouTube channel for amazing hints and tips for your favorite strategy games!

Peter is a YouTube content creator and game Guide writer with a love of strategy games spanning decades.