Facebook Twitter LinkedIn Reddit Share via Email
This wave-based tower defense roguelite is the first released product from developers “2 Stupid Devs”. When I was asked to describe the game the first thing that came to mind was Starship Troopers done in a comic book art style created by Terrance and Philip.
Developer: 2 Stupid Devs
Platforms: PC
Players: 1
Price: 9.99$

Defend and survive in different locations across the galaxy against the hoards of aliens that used to be your allies. The gameplay is essentially broken down into 2 timed phases. The first is exploring and building while the second is the action.

During the explore phase you search around for weapons, materials, and blueprints to increase your odds of survival. You also will conduct repairs on your defenses and build new defenses based on the materials and blueprints you have acquired. Blueprints are either static defensive fortifications like barriers and ground weapons like a tesla coil. Once you have set your defenses you can either trigger a new wave or let the timer bring on the wave automatically.

During the action phase, all hell breaks loose and the waves of bugs slam into your defenses and your crew who are equipped with melee and ranged weapons. You can pause the action and issue orders and to make it easier you can issue global orders for your entire team.

The story mode is just that, when you complete a level in the story mode you move on to unlock more of the story. You gain crew and equipment in a linear fashion. There is full voice acting and of course, comic book cut scenes.

In RNG endless mode you will be periodically given random drops that will give you people, equipment, material, or blueprints. You will also be given the opportunity to leave and go to another map carrying with you the upgrades and characters you have previously found.

In RNG survival there is only one map and you have to hold out as long as you can.

The artwork, for the most part, is a treat, the entire game has a comic book aesthetic. This both works for the game and a bit against it. The weapons all are unique in their animations and the call-outs and voiceovers for each character are fun.

The voice acting is good. I think when there is an annoying character voice acting it is intentional. Again this goes back to the game not taking itself seriously.

The price to value ratio is good for the game. With the multiple issues for the RNG modes and the full story mode, you are going to get a good amount of playtime. If you enjoy unlocking, and leaderboards this will only enhance the value of the game. It’s a good value at full price.

In general, your roguelite progression and metagame as well as strategic decisions, are limited. Yes, there are multiple weapon types and levels but this is really the biggest progression. On the same token, I would have liked to see more stats for the bugs. But that might just be me. I expected to click on a bug and see its stats but alas this is not the case.

The complete adherence to the comic book art style has some issues when you bring it to the interface there are even jokes in the game about redesigning the UI for clarity.

Some of the voice actings got on my nerves especially one character in particular.

In general, I feel the game accomplishes what it is trying to do. It’s not deep and it’s certainly not serious. Nor does it pretend to be. The game serves the genre well and the added features make it an enjoyable experience. I did not find it grindy and I don’t think it wears out its welcome. While there are issues and annoyances I don’t think they are large enough to stop you from picking this one up. If you are looking for a light wave-based defense game I this is a good deal. 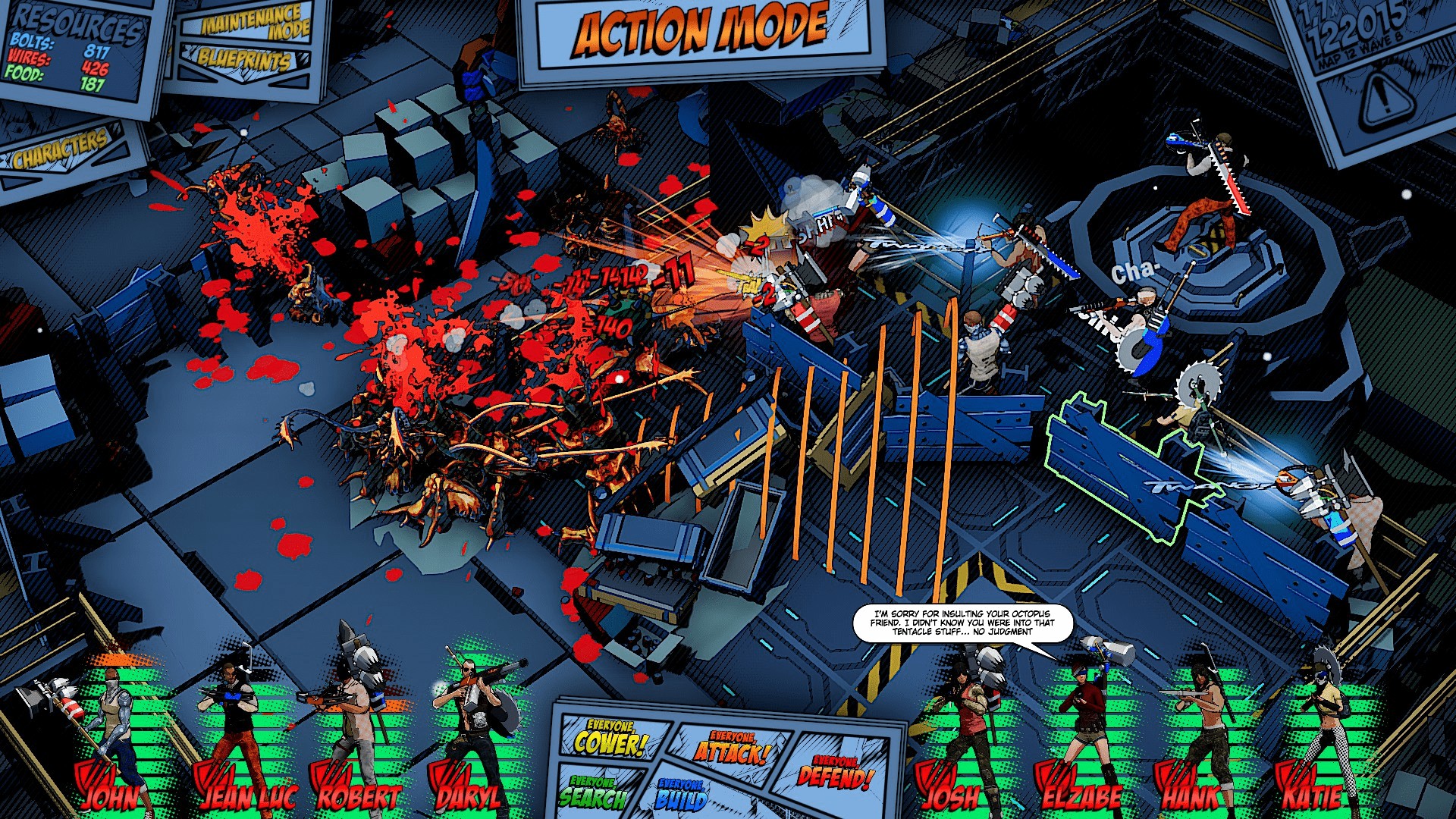 Space Raiders In Space Review
Conclusion
In general, I feel the game accomplishes what it is trying to do. It’s not deep and it’s certainly not serious. Nor does it pretend to be. The game serves the genre well and the added features make it an enjoyable experience.
PROS
Multiple endless and survival modes.
Story mode is usually not seen in a tower defense game.
Lots of laughs.
CONS
It's a lighter title with limited roguelite progression
The UI can be a little difficult when you are starting out.
7.8
Aliens!
Where to buy
Steam