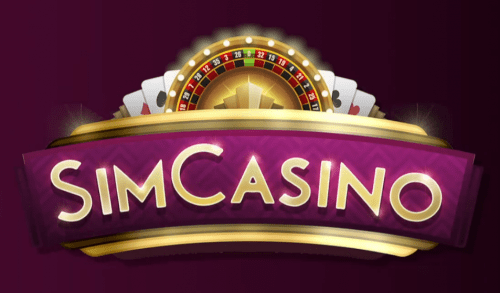 This, of course, is one of the most iconic quotes in cinematic history – Rick Blaine’s reaction to Ilsa Lund’s entry into his Casablanca Gin joint and gambling den.

Casinos have long featured heavily in some of the most iconic and classic films of all time. One such film is Rain Man, which is notable as one of the first movies to be shot inside an actual Casino – the legendary Caeser’s Palace. It introduced the audience to the true scale and size of the Las Vegas Casinos, which are immense.

The film industry’s fascination with casinos has spanned decades. We can see an example of this with the 1960  comedy film Oceans 11, featuring rat pack members such as Frank Sinatra, Dean Martin, and Sammy Davis Jr. The success of the remake in 2001, with the likes of high-ranking Hollywood names such as George Clooney, Elliott Gould, and Brad Pitt, proved the ongoing interest in the theme.

Alternatively, the supposedly seedier side of the casino industry has been pushed into the public consciousness through films such as Robert De Niro’s Casino from 1995. This tells a story of:

“….greed, deception, money, power, and murder occur between two best friends: a mafia enforcer and a casino executive compete against each other over a gambling empire, and over a fast-living and fast-loving socialite.”

Film and culture have presented the casino as a fantastical world, where stakes can be high and it can change forever lives. The only way for the ordinary person to experience these highs and lows of casino ownership was through mediums such as this. That was until game developers LVGameDev LLC came along to present us: 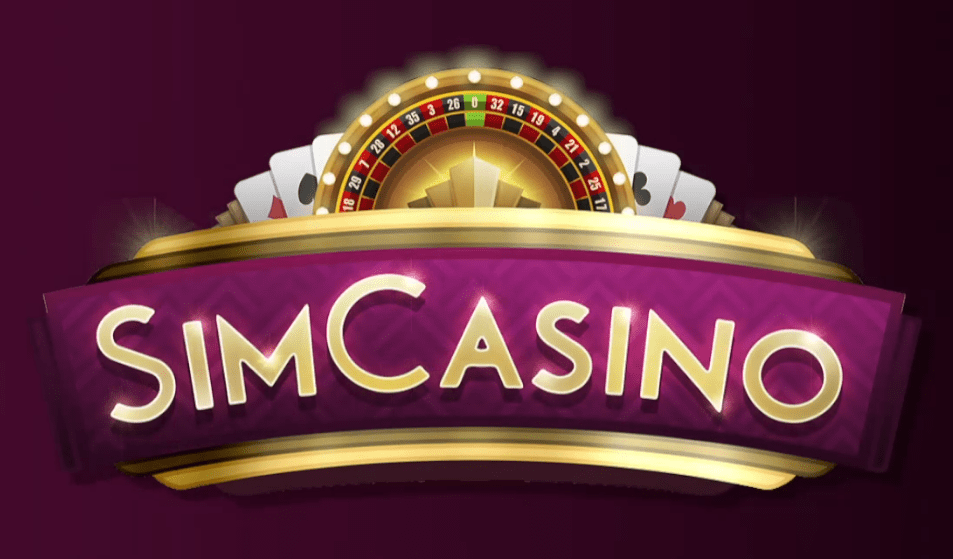 Probably the most important first step into any management simulation is to run through the tutorial – if you are lucky enough to find one. They split the Sim Casino tutorial into 5 sections: Camera Controls, Building and Decorating, A Successful Casino, Managing Staff & Crime, and finally Inventory & Finance. These cover various aspects of the game.

The tutorial follows the path of setting you a task, such as ‘Select the wall tool’. The button that needs pressing flashes. It isn’t until you hover over and click on this task that it becomes obvious where the requisite button items are on the screen. While this approach isn’t a bad thing, the poor flashing mode does not help it. This makes finding the next step easy to miss – unless you are looking directly at the right part of the screen.

Overall, while the Tutorial offers a small introduction, it doesn’t cover the vast amounts of data that exist within the game. It doesn’t begin to scratch the surface of the depth of the game. For example, within the finance hub tutorial, they did not give us any introduction to the Daily Profit & loss, Bank Loans, or Casino Evaluation sections and menus. Considering the driving force of the game is money, we can see this as an oversight. However, a huge oversight is that research doesn’t even feature at all.

It will certainly give you a start in the game. This leaves you with a steep learning curve if you are to get the most out of a large amount of data and build options that the depth of the game offers you.

The User Interface, while not the prettiest, is relatively easy to navigate with most of the tools displayed in a menu on the side of the screen. The remaining buttons are in a ribbon across the bottom of the screen. In the middle of the ribbon is the main section. Here you will find the: Build, Finance, Management, Attractions, Operations, Inventory & Transport, and Research hubs. I should note that once you enter one of these screens, except for the Build menu, you can navigate to any of the other hubs without returning to the main screen.

It surely would have been better just to have one item on the game screen to then access the hubs. This would reduce the clutter on the main screen. This is a minor complaint though and doesn’t detract from the game at all.

The build hub, however, can be much trickier to navigate. While they divide it into distinct sections, it is sometimes much quicker to look in the search bar for what you need. With time and experience, finding things here will become much quicker, but the overall layout is not very user-friendly, squashing everything into a panel at the bottom of the screen. The research screen, in contrast, is more accessible, as everything is in clearly laid out sections in a large window.

Overall, the User Interface provides a huge amount of detail on several aspects of the game. Unfortunately, this comes with very little guidance, which once again means there will be a relatively steep learning curve to fully master it.

On starting a new game, you soon see that Sim Casino doesn’t offer a difficulty setting. It approaches this with a different option. Instead of difficulty, you can choose the level of starting cash you can have. Obviously, the more cash you start with, the easy the game becomes. There are also additional features that you can enable. The first one is the Unlocked Cash feature, which allows you to get into debt, spending money you don’t have. Second, the Instant Research options speed up the process, making the researched component available much quicker. This will, of course, make the game easier. The third allows you to have inventory auto-delivered, finally removing the wait for new staff to arrive. All, or any combination of them, allows you to alter the difficulty of your game in a number different of ways.

Even though the tutorial is limited, it provides you with a great starting point for your first casino. Here, you will inevitably start building a bingo hall and slot machines, which will attract your first customers. From there, through research and expansion, you can start adding various elements, such as toilets, restaurants, several gambling tables, and even hotel rooms, to expand your growing empire. A great feature of the game, although this is very much a personal thing, is that staff recruitment is dealt with by the game. This removes what could be a full-time job. Besides this, it also orders all the resources you need for the casino, for example, food and drink.

To push the casino to its next level, you then need to look into the dizzying amount of data presented to you. This enables you to identify which gaming areas are successful and which are not. You can tweak the cost and prizes of all the games, which tell you how many people will play based on the cost. This is invaluable in understanding the reasons some aspects are a success and some are not.

It must be said, though, that they are times in the game where you can simply press play, sit back and watch the gameplay itself, as the money rolls in with no interaction from yourself. 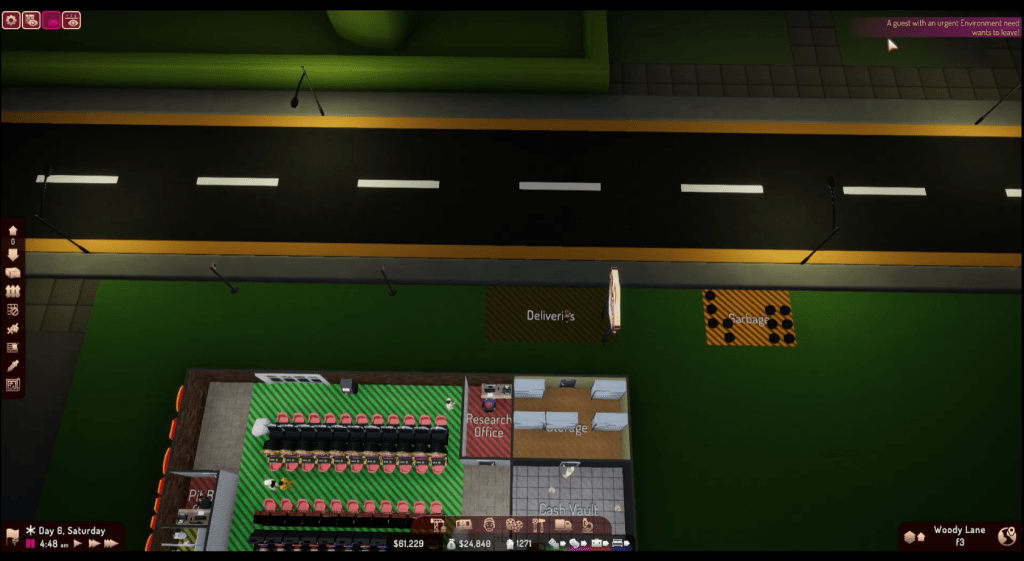 Throughout the game, you will occasionally get messages related to aspects of the casino and its patrons, for example;

“A guest with an urgent Rest need wants to leave”

I would assume that these are hints as to things that could or should be looked at within the casino. It is, however, all too easy to simply ignore them, as you never really see any real-world consequences.

It is also unclear what you are supposed to do once you have completed your first casino. While you can sell your casino and start a new one, there is no feeling of personal development or increasing levels of difficulty. For example, mission – build a casino and make x money and have x number of guests. It is simply building a casino and carrying on until you have maxed everything out or get bored.

The tutorial is shallow in depth and ignores vast sections of the game. It does, however, at least open up basic gameplay, leaving you with a steep learning curve.

The User Interface is clunky and some sections, such as the build menu, are difficult to navigate and poorly laid out. Also, sometimes there is a lack of activity or interaction in the game when you could press play and leave it running without ever having to lift a finger.

While it has several areas where it seems there is a need for improvement, these are not game-breaking. They are merely parts that will take longer to master.

It’s a fun game to play – the only real constraint is your creativity. You could certainly lose yourself happily for a few hours, building your own homage to Las Vegas.

Sim Casino Review
Conclusion
While it has several areas where it seems there is a need for improvement, these are not game-breaking. They are merely parts that will take a bit longer to master. It’s a fun game to play - the only real constraint is your creativity. You could certainly lose yourself quite happily for a few hours, building your own homage to Las Vegas. There are concerns about the clunkiness of things and long-term replayability.
Reader Rating0 Votes
0
PROS
Tutorial provides good basic introduction to game
Relatively simple, if you have followed the tutorial, to get into
Blank canvas to be creative as you want and build what ever you want
Very easy to lose a few hours building a casino
CONS
Tutorial, however, seemingly ignores vast sections of the game
User interface is clunky and not the easiest to navigate
At times you can just leave the game going with no interaction.
No sense of career progression or increasing challenge
6.5
Fun but needs work

I am a typical gamer, & member of the Indie game collective, with years of experience trying to make the most of the limited time that work and family life presents me with. I mainly play Strategy and City Building games such as Foundation and Suzerian. I also like to try and cover/play indie games such as Ambition: A minuet in Power and Kainga: Seeds of Civilization. My Trouserman Tries series sees me try to cover less well-known indie, in the main strategy, simulation and RPG games.