Facebook Twitter LinkedIn Reddit Share via Email
Very good board game port that is the successor to Ascension. It is a deckbuilder that uses a community pool of cards to create a very aggressive style of take-that play and resource management. Fast-paced and easy to learn or teach.
Developer: Temple Games Platforms: PC, Android, iOS Players: 1-4 (Best with 2) Price: 7.99

Age 10+ Playing Time: 30 Minutes BGG Rank: 746 Overall – Strategy 405 2018 Golden Geek Best Card Game Nominee Designed by Stone Blade Entertainment as the follow-up to board game Ascension and ported to the digital platforms by Temple Games the people behind the amazing port of Race and Roll for the Galaxy. This deckbuilder for 2-4 players has the players spending resources to buy characters, allies, champions, and mercenaries in a center shared row. In order to increase the ability to buy more powerful resources or attack the opponent and his champions. The game plays out very aggressively but attacking your opponent is not the only way to win. 30 Minute game time is not true of the digital version I find games to take 10-15 minutes or so. Tom Vassal of The Dice Tower rates this his #1 two player board game of 2018! Tom has spoken very highly of the digital version as well. Once upon a time, there was an unlicensed fan project to create a computer version of the popular game Race for The Stars. Keldon Jones created this with an AI that took the training of thousands of games applying it to a Neural Net to evaluate the best decisions to make. Keldon’s versions of Race for the Stars was a huge hit in the digital boardgame community. The AI in Shards Of Infinity is based on the Keldon Jones AI. Temple games are very experienced with this AI as they made the digital version of Race for the Stars so it makes sense that this was included in Shards Of Infinity. This AI is something special. To make it fair for a new player they add “noise” to the decisions so it does not always pick the best option but maybe the 2nd or 3rd.  Theresa Duringer of Temple Games goes into much more detail about this AI in an article that if you have interest in the subject you should check it out here. For the digital board game category, the price is great. So I feel the base game is a good value for your money. The AI will certainly give you a run for your money though and I think the AI alone is worth the price of admission (I have trouble beating medium). Of course, if you have the ability to play multiplayer the value of this goes up greatly.

In Ascension, you could customize the length of the game by letting you choose your total health. This would have been a nice feature to have. I Would also like to see an update that integrated the latest Steam Play Together functionality for multiplayer asynchronous games. Instead of using email to link to another user, it pulls directly from your steam friends list (as well as email) it also will tell you it’s your turn directly into the steam client. The 4 expansions for the board game are absent. These are excellent additions to the game and add tremendously to the gameplay with new cards and new game modes. Without the expansion, there are 135 cards and only the regular play mode. This is my biggest complaint about the game. I have though confirmed with Temple Games that the first expansion is in development. 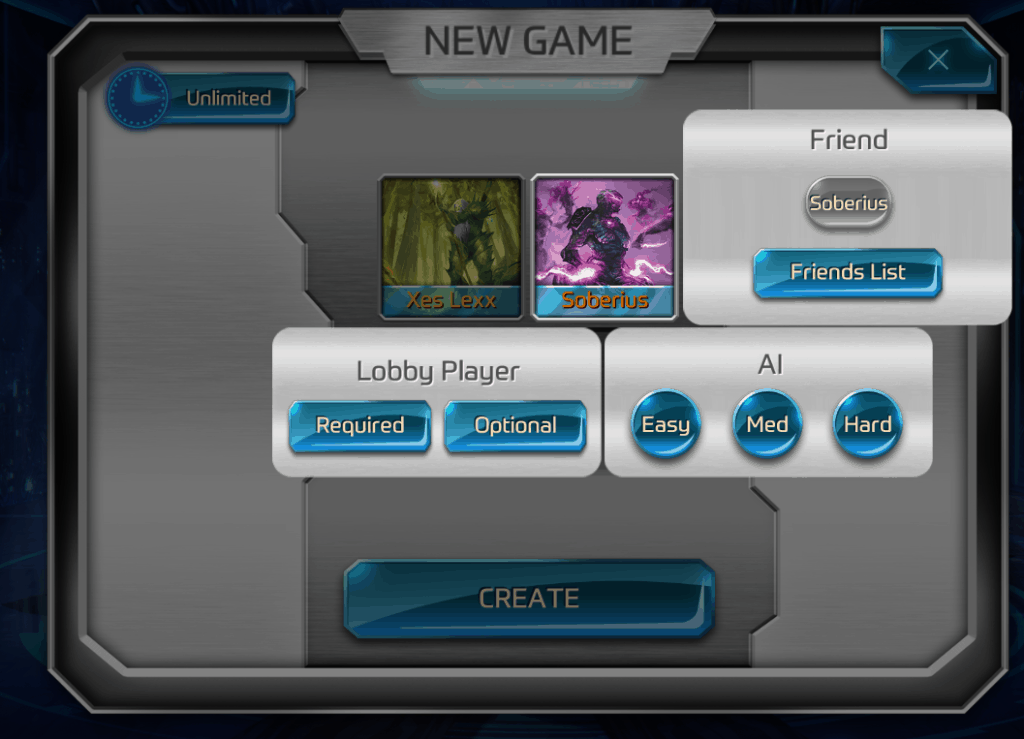 I am a big fan of Ascension but I have played it inside and out, both on the table and on the digital formats it was my go-to iOS game for a long while. So when I heard that Shards shared the same pedigree as Ascension AND it had an AI based on the Keldon Jones neural network done by the people who did the licensed Race for the Galaxy it was pretty much an instant buy. I’ve had no issues with the game on any of the platforms I tested it with and was able to get into games fairly easily. Shards Of Infinity Review
Conclusion
If you are looking for a fun and challenging board game this has got you covered. The UI works well for what it has to display and it's good on tablets as well. I'd like to see the expansions come to the digital version and look forward to that happening.
PROS
Good digital version
Solid AI
Asynchronous multiplayer
CONS
Lacking Expansions
Could use some API updates
8
Infinity Stones
Where to buy
SteamAndroidiOS