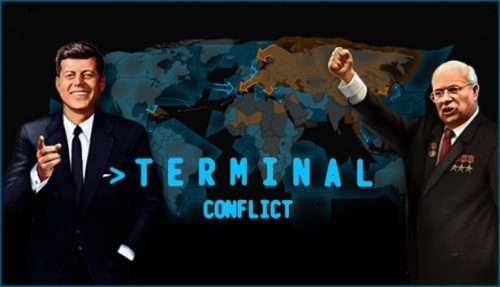 Wargames evoke images of times long past. While the opportunity to relive these periods is fantastic, some are at a point approaching oversaturation. Comparatively, times in the more recent past remain less well explored, such as The Cold War era. A setting becomes more than an interaction when relatable events take place. As much as we might wish to relate to some warriors fighting for a distinct cause where good and evil are assured, the United States spent years in more ambiguous conflicts. Contests where family members, perhaps even those still alive, took part and handed down survival stories.

The Cold War is an ideal gaming setting for a strategy title. That is where Terminal Conflict comes onto the scene. The player can relive some of the most intense globe-spanning moments realized in great historic detail. From the moon landing to the fall of the Berlin wall, the events define the time through the analog glow that is the computer terminal determining the fate of humanity. The game is reminiscent of the 1983 film, Wargames, and its military supercomputer.

As someone who has experienced war firsthand, I have some trepidation towards the arcade-style map painting that can become the meta of grand strategy titles. The entertainment industries often romanticize war despite it being hell. Film media is maturing and with Terminal Conflict I think we can say in gaming as well. It is no accident one can achieve a mutual minor victory as both sides survive until the end. In repeated play throughs, you’ll learn a belligerent stance can create long-term consequences. While outright coordination isn’t possible, this needn’t be a zero-sum game. This sort of thinking sets Strategy Mill apart from other developers. I hope they take notice.

Terminal Conflict still rewards you for cutthroat gameplay, though, with several specific achievements that take a Machiavellian mindset to pull off. The additional content directly helps in that department as well. With the “Eyes Only” upgrade pack historic clandestine operations and their repercussions become available. These are real game changers adding depth and can outweigh the influence of an entire theater of military hardware, not just simple decisions. These operations feel satisfying when RNGesus sides with you.

Since Europa Universalis, I’ve been in love with grand strategy games. The games with staying power speak to the emotions of the era in which they take place. During the age of exploration, the anticipation and sense of discovery are what you look for. The folks at Strategy Mill have distilled the Cold War tension, package it with a familiar sentient computer, and place the launch codes square in your hands. The global map cannot fall under the sway of one superpower alone. Concentrate your focus in any location and I can assure you your opposition is exploiting the situation outside of your view. Like the U.S, you’ll be hard-pressed to make your armor truly capable of opposing the Soviet Juggernaut. Perhaps airpower can be the player’s great equalizer. US carrier dominance can lead to more than just the oceans sharing a shade of blue. A silent strike from below might adjust that power imbalance.

The player is never shoehorned into a specific path. From one 1946 start to another, the same conditions are not a guarantee. In the first US play through, Western Europe is the player’s backyard. The point tally climbed while holding fortress Europe. With the second US play through, the USSR AI started with a focus in Sub-Saharan Africa, immediately requiring a change in plans, followed shortly by a surge in French communist support. The whole time, I felt my interests were in a constant state of chaos. How did I go from so easily dominating the USSR to getting bullied around managing my own domestic affairs? My complacency came with a price.

Playing as the Soviet Union, logistical pathways unlock for tanks to roll into Ireland. The backyard of the Western Imperialists even saw Che swing support to the side of revolution. While seizing key sea zones and straits, the revolution found fertile ground. The second time around, mutual survival became the focus. Mutual survival is often a completely impossible prospect in grand strategy titles, yet significant in realpolitik.

Grand strategy titles live or die based on continued development and mods. I’ve sadly watched some favorites fail to realize this. With Strategy Mill, the point seems well understood. Terminal Conflict’s multiple event options and the DLC add to the game’s re-playability. The team in communications on Discord and other sources are continuously looking at how far they can push the limits. Mods for a modern timeframe are in the works and I’ve heard great things about what is coming down the pipeline. Personally, I would love to see more on-map representation of asymmetric warfare and I’m sure somebody more clever than myself will implement that in time.

Terminal Conflict is the first Steam title from Strategy Mill, but with a launch like this, I’m sure it won’t be the last. All I have to do now is get familiar enough to push my luck and challenge the devs during their Thursday Dev vs Community stream on the Strategy Mill twitch channel.

In Terminal Conflict, the player dons the mantle of multinational leadership. Using clandestine, diplomatic, and direct military operations, you fight to achieve one of three possible victory conditions. As with many grand strategy titles, turn-based actions are shown via map, although in this case with a greater focus on continents and similar regions.

Play as either the US or USSR against the AI or another human in TC’s apocalyptic showdown. These contests of will can be completed in a matter of hours. However, don’t assume that you can learn it all in that amount of time.

Turns are characterized by selected focus appropriate to the timeframe. Random in nature, the player and the opponent switch off between selections. Making each game a new experience.

If you’re going to stare at a map for hours, it better look good. Strategy Mill nailed it. The map is colorblind compatible, atmospherically detailed, and gives great emphasis to primary points of conflict. Straits, areas of historical significance such as Berlin, and logistic corridors are detailed. The controls are straightforward and command movements are intuitive. Menus for detailed policy decisions and leadership selection took longer but became second nature as well. Important details are logged and can be reviewed at the bottom of the screen. While this is a distinct positive for this timeframe, it could be a liability as the game expands. The development team must have understood this as so many moddable options are available.

Terminal Conflict being an indie title is just about where you’d expect it to be on price. The steady release of new content and updates ensures that you get your money’s worth.

Climb out of your place of quarantine and into a fallout shelter. Terminal Conflict gets an 8.8/10.

Disclaimer: I (Seth AKA The Strategy Informer) work for Strategy Mill the developers of Terminal Conflict but in no way did I edit it or contribute to the content of this article – I had another team member do all the editing. The only exception is the images – I provided the images for the article. I confirmed the score with Nord and Hazzie – we had a long discussion about it to validate that was his opinion and that it was a solid representation of his experience. Nord and Hazzie Terminal Conflict Review
Conclusion
Grand Strategy games can be a difficult pitch for the unassociated. Making the connections that take it from abstract to personal are rare. That’s why Terminal Conflict is such a gem. The tension of the cold war timeframe sets the scene. The player’s choices actively make and change global policy as opposed to just background noise. Thermonuclear war is an option, but the player isn’t shoehorned into cold war reenactment. Terminal Conflict is a living breathing game under continuous refinement.
PROS
Finally a cold war title!
Historic details
Win or lose your way
RNG for replayability
CONS
Steep learning curve
Tooltips could be expanded on
8.8

Hazziesof and Nordcmonkey. They’ve been gaming together for over 20 years and share a passion for cooperative games in a variety of genres. You can catch them showcasing games on Twitch and YouTube.